WASHINGTON — Phone records and intercepted calls show that members of Donald J. Trump’s 2016 presidential campaign and other Trump associates had repeated contacts with senior Russian intelligence officials in the year before the election, according to four current and former American officials.

American law enforcement and intelligence agencies intercepted the communications around the same time that they were discovering evidence that Russia was trying to disrupt the presidential election by hacking into the Democratic National Committee, three of the officials said. The intelligence agencies then sought to learn whether the Trump campaign was colluding with the Russians on the hacking or other efforts to influence the election.

The officials interviewed in recent weeks said that, so far, they had seen no evidence of such cooperation.

But the intercepts alarmed American intelligence and law enforcement agencies, in part because of the amount of contact that was occurring while Mr. Trump was speaking glowingly about the Russian president, Vladimir V. Putin. At one point last summer, Mr. Trump said at a campaign event that he hoped Russian intelligence services had stolen Hillary Clinton’s emails and would make them public.

The officials said the intercepted communications were not limited to Trump campaign officials, and included other associates of Mr. Trump. On the Russian side, the contacts also included members of the Russian government outside of the intelligence services, the officials said. All of the current and former officials spoke on the condition of anonymity because the continuing investigation is classified.

The officials said that one of the advisers picked up on the calls was Paul Manafort, who was Mr. Trump’s campaign chairman for several months last year and had worked as a political consultant in Russia and Ukraine. The officials declined to identify the other Trump associates on the calls.

The call logs and intercepted communications are part of a larger trove of information that the F.B.I. is sifting through as it investigates the links between Mr. Trump’s associates and the Russian government, as well as the D.N.C. hack, according to federal law enforcement officials. As part of its inquiry, the F.B.I. has obtained banking and travel records and conducted interviews, the officials said.

Mr. Manafort, who has not been charged with any crimes, dismissed the accounts of the American officials in a telephone interview on Tuesday. “This is absurd,” he said. “I have no idea what this is referring to. I have never knowingly spoken to Russian intelligence officers, and I have never been involved with anything to do with the Russian government or the Putin administration or any other issues under investigation today.”

Several of Mr. Trump’s associates, like Mr. Manafort, have done business in Russia, and it is not unusual for American businessmen to come in contact with foreign intelligence officials, sometimes unwittingly, in countries like Russia and Ukraine, where the spy services are deeply embedded in society. Law enforcement officials did not say to what extent the contacts may have been about business.

Officials would not disclose many details, including what was discussed on the calls, which Russian intelligence officials were on the calls, and how many of Mr. Trump’s advisers were talking to the Russians. It is also unclear whether the conversations had anything to do with Mr. Trump himself.

A published report from American intelligence agencies that was made public in January concluded that the Russian government had intervened in the election in part to help Mr. Trump, but did not address whether any members of the Trump campaign had participated in the effort.

The intercepted calls are different from the wiretapped conversations last year between Michael T. Flynn, President Trump’s former national security adviser, and Sergey I. Kislyak, the Russian ambassador to the United States. During those calls, which led to Mr. Flynn’s resignation on Monday night, the two men discussed sanctions that the Obama administration imposed on Russia in December. 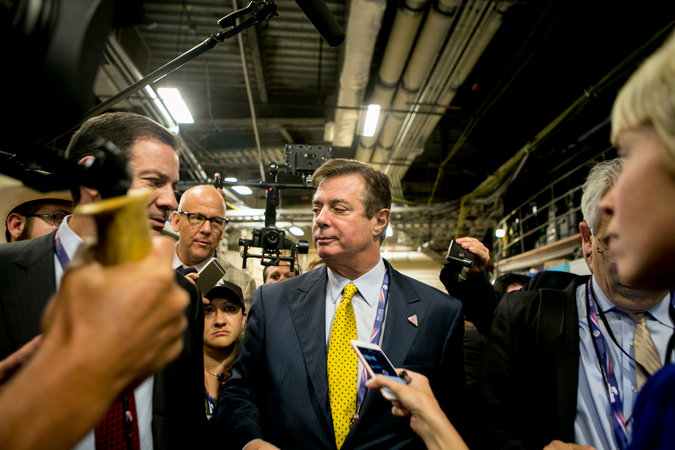 But the cases are part of the routine electronic surveillance of communications of foreign officials by American intelligence and law enforcement agencies.

The White House did not immediately respond to a request for comment. The F.B.I. declined to comment.

Two days after the election in November, Sergei A. Ryabkov, the deputy Russian foreign minister, said that “there were contacts” during the campaign between Russian officials and Mr. Trump’s team.

“Obviously, we know most of the people from his entourage,” Mr. Ryabkov said in an interview with the Russian Interfax news agency.

The Trump transition team denied Mr. Ryabkov’s statement. “This is not accurate,” Hope Hicks, a spokeswoman for Mr. Trump, said at the time.

The National Security Agency, which monitors the communications of foreign intelligence services, initially captured the communications between Mr. Trump’s associates and Russians as part of routine foreign surveillance. After that, the F.B.I. asked the N.S.A. to collect as much information as possible about the Russian operatives on the phone calls, and to search through troves of previous intercepted communications that had not been analyzed.

The F.B.I. has closely examined at least four other people close to Mr. Trump, although it is unclear if their calls were intercepted. They are Carter Page, a businessman and former foreign policy adviser to the campaign; Roger Stone, a longtime Republican operative; and Mr. Flynn.

All of the men have strongly denied they had any improper contacts with Russian officials.

As part of the inquiry, the F.B.I. is also trying to assess the credibility of information contained in a dossier that was given to the bureau last year by a former British intelligence operative. The dossier contained a raft of salacious allegations about connections between Mr. Trump, his associates and the Russian government. It also included unsubstantiated claims that the Russians had embarrassing videos that could be used to blackmail Mr. Trump.

The F.B.I. has spent several months investigating the leads in the dossier, but has yet to confirm any of its most explosive allegations.

Senior F.B.I. officials believe that the former British intelligence officer who compiled the dossier, Christopher Steele, has a credible track record, and he briefed F.B.I. investigators last year about how he obtained the information. One American law enforcement official said that F.B.I. agents had made contact with some of Mr. Steele’s sources.

The F.B.I.’s investigation into Mr. Manafort began last spring as an outgrowth of a criminal investigation into his work for a pro-Russian political party in Ukraine and for the country’s former president, Viktor F. Yanukovych. The investigation has focused on why he was in such close contact with Russian and Ukrainian intelligence officials.

The bureau did not have enough evidence to obtain a warrant for a wiretap of Mr. Manafort’s communications, but it had the N.S.A. closely scrutinize the communications of Ukrainian officials he had met.

The F.B.I. investigation is proceeding at the same time that separate investigations into Russian interference in the election are gaining momentum on Capitol Hill. Those investigations, by the House and Senate Intelligence Committees, are examining not only the Russian hacking but also any contacts that Mr. Trump’s team had with Russian officials during the campaign.

On Tuesday, top Republican lawmakers said that Mr. Flynn should be one focus of the investigation, and that he should be called to testify before Congress. Senator Mark Warner of Virginia, the top Democrat on the Intelligence Committee, said that the news surrounding Mr. Flynn in recent days underscored “how many questions still remain unanswered to the American people more than three months after Election Day, including who was aware of what, and when.”

Mr. Warner said that Mr. Flynn’s resignation would not stop the committee “from continuing to investigate General Flynn, or any other campaign official who may have had inappropriate and improper contacts with Russian officials prior to the election.”