A cheerful read to get your Sunday started off right.

Temptation grows for right-wingers to consciously uncouple from his supporters. 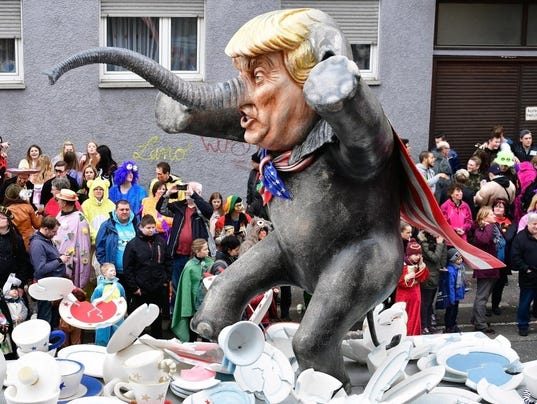 By Christian Schneider, 5:02 a.m. ET March 17, 2017
From USA TODAY
Most political writers think they have a great Hollywood screenplay in their brain somewhere — who wouldn’t trade waking up every morning to an avalanche of angry emails to hanging out on red carpets with Jennifer Lawrence?

My screenplay’s elevator pitch would go thusly: It’s a madcap comedy in which a husband (played presumably by Paul Rudd) wants to divorce his wife (J-Law, call me). But the husband wants to be able to blame the split on his wife, so he tries to bait her into having an affair with his oafish best friend (Zach Galifianakis), whom he pays to seduce her. Hijinks ensue as Rudd and Lawrence realize they were really the ones for each other all along. (Sadly, I only recently discovered this closely resembles the plot of the 1961 Pietro Germi classic, Divorce, Italian Style.)

Outside the silver screen, it occurred to me that the strategy of baiting a spouse into a justifiable divorce could be a valuable political tool, as well. American conservatives are locked in a tumultuous marriage with ideology-free populist President Trump, and the temptation for right-wingers to consciously uncouple from Trump’s nationalist supporters grows stronger daily.

Take last week’s rollout of what House Republicans are calling the “American Health Care Act,” a plan crafted by the speaker of the House, longtime conservative stalwart Paul Ryan. The plan was a sponge for negative reviews, but Trump gave it his imprimatur, offering to do everything he could to aid its passage.

But while Ryan burned up the airwaves selling the plan, Trump’s roving band of alt-righters at Breitbart.com were working to undermine the speaker as soon as the plan dropped. The site, formerly headed by Trump chief strategist Steve Bannon, has had it out for Ryan for years: In December 2015, Bannon wrote to one of his reporters that his goal was to have Ryan “gone by spring.”

After the AHCA announcement last week, Breitbart leaked the audio of an October 2016 Ryan conference call in which the House speaker said he was “not going to defend Donald Trump — not now, not in the future.” The website said the recording “calls into question whether Speaker Ryan … really understands how Trump won and how to win in general.”

Yet these Ryan comments had already been reported — so the fact that Breitbart‘s Matthew Boyle thought they were somehow suddenly newsworthy during the health care debate is the only noteworthy part of the story. In essence, Ryan negotiated a less-than-conservative deal with Trump, took heat for it, then found himself under attack by Trump’s acolytes for his efforts. On Wednesday, the Ides of March, Trump supporter Jeffrey Lord told CNN he thinks the White House should ignore the “Ryan plan” and instead let Obamacare “crash.”

This knife between Ryan’s shoulder blades isn’t the first blow struck by the alt-righters, and it certainly won’t be the final one. Look forward to similar battles on the administration’s upcoming $1 trillion infrastructure plan and efforts to negotiate trade deals that isolate America from world markets. No doubt a new generation of Republicans is going to grow up thinking these are things conservatives stand for.

But what if Republicans could stop this drift towards populism through trickery? How hard would it be to bait Trump into some sort of impeachable offense that they could use as an excuse to throw him overboard? Conservatives, think of it: You’re only one late-night, ill-advised Trump tweet away from President Pence.

Granted, impeachment is a tough thing to drag a country through. But lefties are already using the “I-word.” Why not throw another side dish onto the plate that conservatives will enjoy, too?  Things have gotten so bad, one poll released last week showed that 62% of Democrats would rather see Mike Pence as president than Donald Trump. Liberals would rather see a predictable Christian conservative running the country than a man who thinks network reporters are mean to him because they are overtaken by their menstrual cycles.

For conservatives, how difficult could it really be to entrap Trump in some impeachable offense?

For beginners, just have Rosie O’Donnell tweet, “I bet he doesn’t even know the nuclear codes!” Then watch him angrily tweet them back.

Or talk Meryl Streep into calling Trump late at night and, while doing a Vladimir Putin impersonation, talk Trump into invading Mexico for its maraca reserves. (This is especially inspired because it would serve dual purposes: Show Trump she’s a great actor and bring America to the brink of nuclear war.)

Better yet, Ryan could write a skit for Saturday Night Live full of jokes about how little money Trump has made over the past three decades, prompting the narcissist in chief to immediately tweet all his tax returns. When we see the amount penciled in to the “tax deduction for treasonous foreign dealings” line, we’ve got him!

Perhaps this all seems like a long shot. But given the president’s pattern of behavior, can anyone rule anything out? Without action now, Trump is going to set conservatism back to the pre-Goldwater era of the 1950s.

The divorce needs to happen now. And to be clear, Mr. President, it’s not us. It’s definitely you.

Christian Schneider is a member of USA TODAY‘s Board of Contributors and a columnist for the Milwaukee Journal Sentinel. Follow him on Twitter @Schneider_CM.