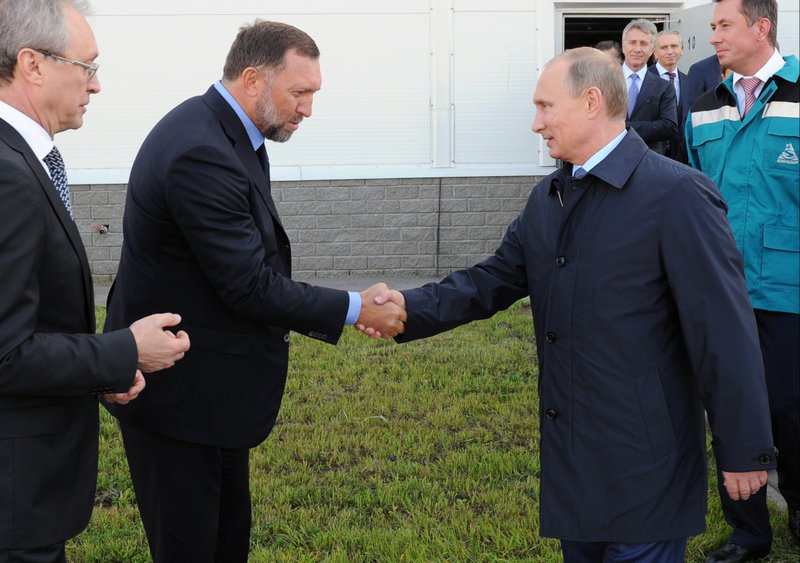 By JEFF HORWITZ and CHAD DAY, The Associated Press

WASHINGTON (AP) — President Donald Trump’s former campaign chairman, Paul Manafort, secretly worked for a Russian billionaire to advance the interests of Russian President Vladimir Putin a decade ago and proposed an ambitious political strategy to undermine anti-Russian opposition across former Soviet republics, The Associated Press has learned. The work appears to contradict assertions by the Trump administration and Manafort himself that he never worked for Russian interests.

Manafort proposed in a confidential strategy plan as early as June 2005 that he would influence politics, business dealings and news coverage inside the United States, Europe and the former Soviet republics to benefit the Putin government, even as U.S.-Russia relations under Republican President George W. Bush grew worse.

Manafort pitched the plans to Russian aluminum magnate Oleg Deripaska, a close Putin ally with whom Manafort eventually signed a $10 million annual contract beginning in 2006, according to interviews with several people familiar with payments to Manafort and business records obtained by the AP. Manafort and Deripaska maintained a business relationship until at least 2009, according to one person familiar with the work.

“We are now of the belief that this model can greatly benefit the Putin Government if employed at the correct levels with the appropriate commitment to success,” Manafort wrote in the 2005 memo to Deripaska. The effort, Manafort wrote, “will be offering a great service that can re-focus, both internally and externally, the policies of the Putin government.”

Manafort’s plans were laid out in documents obtained by the AP that included strategy memoranda and records showing international wire transfers for millions of dollars. How much work Manafort performed under the contract was unclear.

The disclosure comes as Trump campaign advisers are the subject of an FBI probe and two congressional investigations. Investigators are reviewing whether the Trump campaign and its associates coordinated with Moscow to meddle in the 2016 campaign. Manafort has dismissed the investigations as politically motivated and misguided. The documents obtained by AP show Manafort’s ties to Russia were closer than previously revealed.

In a statement to the AP, Manafort confirmed that he worked for Deripaska in various countries but said the work was being unfairly cast as “inappropriate or nefarious” as part of a “smear campaign.”

“I worked with Oleg Deripaska almost a decade ago representing him on business and personal matters in countries where he had investments,” Manafort said. “My work for Mr. Deripaska did not involve representing Russia’s political interests.”

Sen. Lindsey Graham, R-S.C., one of Trump’s critics in the Senate, called the disclosures about payments to Manafort from the Russian billionaire “very disturbing if true.”

“That’s basically taking money to stop the spread of democracy, and that would be very disturbing to me,” he said Wednesday on Capitol Hill.

Democrats on the House intelligence committee said the new revelations will feature in the congressional investigations. Rep. Eric Swalwell, D-Calif., said on MSNBC on Wednesday that Manafort should appear before the committee, and he raised the specter of a subpoena should Manafort not appear on his own.

Another member of the intelligence committee, Rep. Jackie Speier, D-Calif., said the disclosure “undermines the groundless assertions that the administration has been making that there are no ties between President Trump and Russia. This is not a drip, drip, drip” situation, she said. “This is now dam-breaking with water flushing out with all kinds of entanglements.”

Deripaska became one of Russia’s wealthiest men under Putin, buying assets abroad in ways widely perceived to benefit the Kremlin’s interests. U.S. diplomatic cables from 2006 described Deripaska as “among the 2-3 oligarchs Putin turns to on a regular basis” and “a more-or-less permanent fixture on Putin’s trips abroad.” In response to questions about Manafort’s consulting firm, a spokesman for Deripaska in 2008 — at least three years after they began working together — said Deripaska had never hired the firm. Another Deripaska spokesman in Moscow last week declined to answer AP’s questions.

When asked Wednesday about Manafort’s work for Deripaska, White House spokeswoman Sarah Huckabee Sanders said, “We do not feel it’s appropriate to comment on someone who is not an employee at the White House,” although Press Secretary Sean Spicer discussed Manafort earlier this week during a televised news briefing.

Manafort worked as Trump’s unpaid campaign chairman last year from March until August, a period that included the Republican National Convention that nominated Trump in July. Trump asked Manafort to resign after AP revealed that Manafort had orchestrated a covert Washington lobbying operation until 2014 on behalf of Ukraine’s ruling pro-Russian political party.

The newly obtained business records link Manafort more directly to Putin’s interests in the region. According to those records and people with direct knowledge of Manafort’s work for Deripaska, Manafort made plans to open an office in Moscow, and at least some of his work in Ukraine was directed by Deripaska, not local political interests there. The Moscow office never opened.

Manafort has been a leading focus of the U.S. intelligence investigation of Trump’s associates and Russia, according to a U.S. official. The person spoke on condition of anonymity because details of the investigation are confidential. Meanwhile, federal criminal prosecutors became interested in Manafort’s activities years ago as part of a broad investigation to recover stolen Ukraine assets after the ouster of pro-Russian President Viktor Yanukovych there in early 2014. No U.S. criminal charges have ever been filed in the case.

FBI Director James Comey, in confirming to Congress the federal intelligence investigation this week, declined to say whether Manafort was a target. Manafort’s name was mentioned 28 times during the hearing of the House intelligence committee, mostly about his work in Ukraine. No one mentioned Deripaska.

On Monday, Spicer had singled out Manafort when asked about possible campaign contacts with Russia. He said Manafort “played a very limited role for a very limited amount of time” in the campaign, even though as Trump’s presidential campaign chairman he led it during the crucial run-up to the Republican National Convention.

Manafort and his associates remain in Trump’s orbit. Manafort told a colleague this year that he continues to speak with Trump by telephone. Manafort’s former business partner in eastern Europe, Rick Gates, has been seen inside the White House on a number of occasions. Gates has since helped plan Trump’s inauguration and now runs a nonprofit organization, America First Policies, to back the White House agenda.

Gates, whose name does not appear in the documents, told the AP that he joined Manafort’s firm in 2006 and was aware Manafort had a relationship with Deripaska but was not aware of the work described in the memos. Gates said his work was focused on domestic U.S. lobbying and political consulting in Ukraine at the time. He said he stopped working for Manafort’s firm in March 2016 when he joined Trump’s presidential campaign.

Manafort told Deripaska in 2005 that he was pushing policies as part of his work in Ukraine “at the highest levels of the U.S. government — the White House, Capitol Hill and the State Department,” according to the documents. He also said he had hired a “leading international law firm with close ties to President Bush to support our client’s interests,” but he did not identify the firm. Manafort also said he was employing unidentified legal experts for the effort at leading universities and think tanks, including Duke University, New York University and the Center for Strategic and International Studies.

Manafort did not disclose details about the lobbying work to the Justice Department during the period the contract was in place.

Under the Foreign Agents Registration Act, people who lobby in the U.S. on behalf of foreign political leaders or political parties must provide detailed reports about their actions to the department. Willfully failing to register is a felony and can result in up to five years in prison and a fine of up to $250,000, though the government rarely files criminal charges.

Deripaska owns Basic Element Co., which employs 200,000 people worldwide in the agriculture, aviation, construction, energy, financial services, insurance and manufacturing industries, and he runs one of the world’s largest aluminum companies. Forbes estimated his net worth at $5.2 billion. How much Deripaska paid Manafort in total is not clear, but people familiar with the relationship said money transfers to Manafort amounted to tens of millions of dollars and continued through at least 2009. They spoke on condition of anonymity because they were not authorized to discuss the secret payments publicly.

In strategy memos, Manafort proposed that Deripaska and Putin would benefit from lobbying Western governments, especially the U.S., to allow oligarchs to keep possession of formerly state-owned assets in Ukraine. He proposed building “long term relationships” with Western journalists and a variety of measures to improve recruitment, communications and financial planning by pro-Russian parties in the region.

Manafort proposed extending his existing work in eastern Europe to Uzbekistan, Tajikistan and Georgia, where he pledged to bolster the legitimacy of governments friendly to Putin and undercut anti-Russian figures through political campaigns, nonprofit front groups and media operations.

For the $10 million annual contract, Manafort did not use his public-facing consulting firm, Davis Manafort. Instead, he used a company, LOAV Ltd., that he had registered in Delaware in 1992. He listed LOAV as having the same address as his lobbying and consulting firms in Alexandria, Virginia. In other records, LOAV’s address was listed as Manafort’s home, also in Alexandria. Manafort sold the home in July 2015 for $1.4 million. He now owns an apartment in Trump Tower in New York, as well as other properties in Florida and New York.

One strategy memo to Deripaska was written by Manafort and Rick Davis, his business partner at the time. In written responses to the AP, Davis said he did not know that his firm had proposed a plan to covertly promote the interests of the Russian government.

Davis said he believes Manafort used his name without his permission on the strategy memo. “My name was on every piece of stationery used by the company and in every memo prior to 2006. It does not mean I had anything to do with the memo described,” Davis said. He took a leave of absence from the firm in late 2006 to work on John McCain’s 2008 presidential campaign.

Manafort’s work with Deripaska continued for years, though they had a falling out laid bare in 2014 in a Cayman Islands bankruptcy court. The billionaire gave Manafort nearly $19 million to invest in a Ukrainian TV company called Black Sea Cable, according to legal filings by Deripaska’s representatives. It said that after taking the money, Manafort and his associates stopped responding to Deripaska’s queries about how the funds had been used.